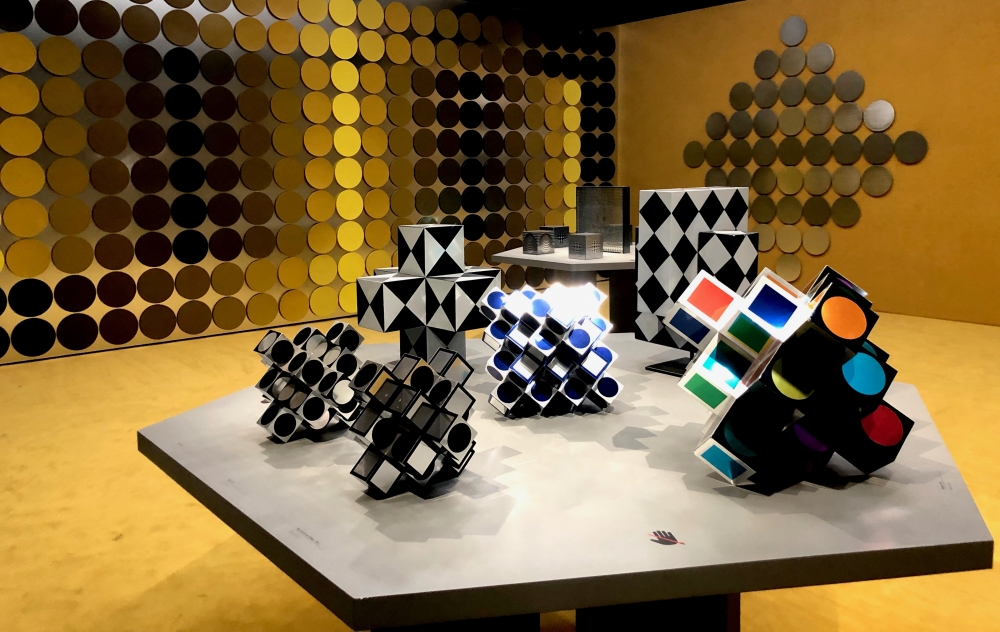 The first major retrospective of Victor Vasarely in France is taking place at the Center Pompidou and we are very proud to have his work in our collection.

Through 300 works, objects and documents distributed in 7 cores, Vasarely Le Partage Des Formes, presents a chronological and thematic journey between the different facets of the artist's work and all aspects of his production: paintings, sculptures, multiples, integrations architectural, advertising and studies of its beginnings. To understand how their enormously popular images were conceived in the context of the Cold War, it will be necessary to refer directly to their training and their first professional experiences. Vasarely was apprenticed to Sandor Bortnyik, a character close to the Bauhaus school. With Bortnyik, Victor learned to adapt the language of modernism to a commercial format, and it was in this area, that of advertising, that the young Hungarian artist applied these first concerns materially.

The vital conviction of Vasarely can be summed up in a few words: "Art can change life", but for this to happen, it must also change itself; both in its form of conception, as well as production and diffusion. The way in which he saw aesthetic production was always related to memories of his everyday life. Whether it was through the window of a moving train; in the patterns of the bandage that surrounded his hand, or in the images that diaphanous were seen behind a hazy environment: the vibration of lines and the illusory optical phenomena, he had already experienced them before taking them to his famous works. Vasarely understood that if art was to be managed as an agent of important social change, the first thing to do was secularize it. With the foregoing in mind and with the references he had learned until then, it was clear that the course around which the task was to be achieved was based on a "universal plastic alphabet" that, when transferred to architecture, would be present  in the daily life of the general society.

Victor Vasarely was a creator of imaginary universes; to what extent the visual culture of the 60s and 70s was influenced by their creative work is difficult to calculate. His approach to geometric and optical abstraction generated an entire visual format within science fiction, and his interest in democratizing art was so successful that we could well consider it the European Andy Warhol. Sufficient it to mention, to gauge his popular reach, that a cover as iconic as David Bowie's Space Oddity, is his own. More than reducing Vasarely as the inventor of optical-kinetic art, surely, we should think of him as a true aesthetic astronaut, a discoverer of plastic dimensions that, to date, represent columns of charge in the structure of our visual memory.

The exhibition of the Centre Pompidou, Vasarely Le Partage Des Formes, represents not only a commemoration of the legacy that this creator printed in the popular culture of the whole world, but a recognition; an awareness that the plastic universe he conceived is still present and remains relevant. More than performing a chronological retrospective on the "Great Artist", commissioners Michel Gauthier and Arnauld Pierres, sought to delve into the "algorithm" of Vasarely, unravel the how and why of his titanic mission to secularize art. As a way of conclusion, we must say that the works of Victor Vasarely not only have survived the passage of time, but the ethical foundation that drove his creative work is, perhaps more than ever, a principal notion in the conception of contemporary artistic work: art must change life.