Two axes compose the exhibition: the impermanence of the monumental and the permanence of the ephemeral. Mesa infinita (2020) represents the first axis: the transformation of the castle suggests that the views of history represented by monuments are also subject to profound changes with the passing of time. Their importance is clear when we consider how Mexico has built and rebuilt its own past. Throughout centuries, the figure of the pre-Hispanic has set the pattern for the origin of what is Mexican; where, in the 19th century, the indigenous was seen as a classical past and a present to be overcome through modernization, in the 20th it was redefined as a tragic past in need of recovery before Spanish legacy, though yet subjected to a modernizing discourse.

The Mesa infinita (2020) is not only a representation of the inevitability of ruin and a parable of the ephemeral against permanence, but also an open field for sculptural practice. It is necessary to remember that this exhibition is primarily about sculpture: the sand of the Mesa is a material of infinite possibilities, in the same way historical events can be interpreted and sculpted without end. Like small children in sandboxes, sculptural work is a discovery of the power of our hands and how it is that they connect us directly with the world. The Mesa will never remain the same; it is a constant sculptural essay, a simultaneously stable and unstable form, whose duration is also variable. But it is also a work table, it is a miniature sculpture garden, it is a blank drawing or a model, a school of forms. Its malleability and its possibilities of being different things for different points of view are representative of the common grounds shared by both artistic and historical practices

The canon of national narratives, which is known among historians as the “history of bronze”, makes of monumental representations the leading current of the country’s history. In it, what is Mexican is conceived as a monolithic identity in which the indigenous constitues a distant, petrified past, ignoring the contemporaneity and diversity of the communities living in the country. The installation that makes up the second axis of the exhibition alludes to the history upon which Mexico’s everyday life is built, and that the history of bronze pretends to immobilize, excluding the continuities between past and present that turn all those great national events into a sand castle. Traditions and daily practices will continue evolving beyond our days, and the works shown, closer to the earth than all those monuments that pretend to reach the skies, awaken emotions and thoughts that seek not to praise the nation, but show its concrete existence.

Through reuse and recycling, Diego Pérez’s artistic practice resignifies everyday objects whose relationships with history are complex, reminding us that they change constantly. Pérez helps us remember that not everything is sacred, that what unites us are not so much the monumental silhouettes of the history of bronze but its discarded fragments of everyday life, the small and profound narratives we have in common and whose destiny is change.

The Prócer anónimo (Anonymous Dignatary) and the untitled sculpted stones (2015) are ready- mades that Diego Pérez bought from an amateur artisan from Chimalhuacán, State of Mexico. Sculpted in concrete, which makes sculptural work extremely difficult, the Prócer suggests the firm continuity of the national imaginary at all levels of society. Similar to the numberless busts of 19th century president Benito Juárez, which can be found across the entire country and are made by professionals and amateurs alike, this generically patriotic figure enters the gallery space and the artworld as an index of the inherent exclusions of the art category, from the material to the technical. Setting up an interplay between the individuality of the artist and the anonymity of the artisan, the Prócer represents as well those unique transformations of history when appropriated by everyday life; the stones become archaeological registers of the present, pointing towards the ways in which culture is not the strict product of renowned heroes but of wide social interactions whose name is impossible to determine.

All the major events of humanity are always accompanied by their counterpart, a kind of shadow that blurs them, and that isn’t necessarily the same story as that of the defeated. Every conquest, every monumental work, every human achievement has a counterpart, a loss, a tear, a sacrifice.

Vasco Núñez de Balboa (1475-1519) had a fundamental role in the subjugation of numerous American indigenous populations, especially in the region then known as Darién, an actual part of Colombia. One of the practices that characterized him was aperreamiento or “dog- siccing”: after torturing the peoples who resisted the Spanish Empire, he ordered his dogs to dismember them. Under the pretext of punishing sodomy, Núñez massacred persons by using his animals as weapons of war, afterwards claiming the gold of his victims. The level of violence and destruction undertaken by the conqueror was unprecedented, provoking revulsion among Americans and some Europeans. Nevertheless, his fervor for the expansion of Catholicism was celebrated in the Spanish courts, opening the way for the Empire towards the Pacific Ocean. 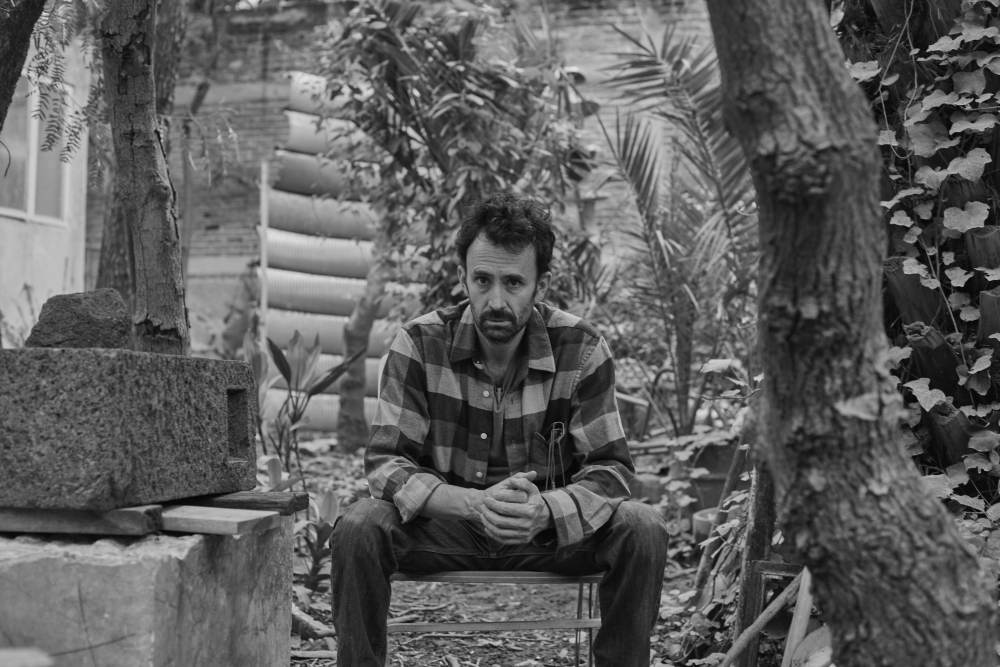 Diego Pérez at his studio

Diego Pérez’s multidisciplinary practice continually plays with the idea of the border, be they the limits that divide art from other sorts of objects, those that divide art from the wider public, or those that separate contemplation from experimentation. The artist articulates a sculptural imagination in which every material is an inexhaustible source of forms whose relationships do not end in the work, but which extend towards environment and spectator alike.

Having started his career in the field of photography, Pérez has oriented his work towards the public life of objects, fomenting, not without a degree of humor and an affinity for fantasy, an inquiry about social relationships that give works meaning. It is in everyday life where a chair becomes a shelf, or where a box transforms into a plant pot; the art-life border is constituted and dissolved in the conjunction of public space, work, and spectator.

For Pérez, it is important to let imagination and daydreaming flow, because that is where the contact between apparently separate camps is produced – between artist and artisan, connoisseur, casual observer, and so on.