One of the abstract art movements of the mid-20th century that positioned itself as an alternative to the cultural dichotomy of the Cold War was kineticism, of which Jesús Soto (1923-2005) was one of its greatest exponents. His experimental vanguardism, back then, was guided by a conception of abstraction that did not suppose an “artistic objectivity” or an absolute subjectivity, but the possibility of closing the distance between artwork and spectator. Nonetheless, Soto saw the art-society relationship as similar to that of science-society, where art functions as a tool of knowledge, and where artistic procedures were analogous to those of science.

This structure presents a formal game in which, in distinction to many other works of the same kind, solid-color squares are prominent, almost to the detriment of the underlying grid. The distribution of the black and blue squares in the form of a cross suggest an ambivalence of meaning, recalling even an architectural plan; even if the blue is restricted by the black in its vertical development, horizontally, towards where Soto’s works tended to extend (with murals as best example), it is free to access the rest of reality. The restriction that the artist enacts, where the reticule remains an element beyond color, develops towards the here and now, towards that which exists. The color works like an index of an internal movement and its displacement towards the outside: perception fulfills the intention of said movement, making the materiality of reality and that of the work coextensive, one and the same.

Towards the end of the century, Soto definitively rejected his initial ambivalence and declared that abstraction was, in fact, a form of objective reality. Such a reality was a common element to every being, meaning that the collective premises of kineticism turned fundamental in any sort of formal research. These premises suggested that the works were built solely from experiences in common, or in other words, from the multiplicity of compared perspectives, in continuation with the discoveries of cubism.

This structure is composed by a panel upon which four black squares are erected, placed in a way that blocks a fifth black square beneath, creating the shape of a cross when the composition is looked at from the front. The symmetry of these forms creates an interplay with the white grid of the background; the vibration it provokes when spectators begin to move results in the instability of the squares and therefore also of the cross. Perception reconstructs the composition time and again, despite the very solidity or fixity that the black blocks of color suggest at first.

The name of this piece centers on the violet square that appears twice in different sizes. It draws attention to how the relationships between the color blocks, the reticule, and the introduction of a white space in the bottom section make the stability of shapes difficult. The simplicity of the square becomes complexity once it is related to the rest of the structure, generating asymmetries and distinctions of size that are built entirely in the perception of spectators. As one of Soto’s late works, it showcases the manner in which a stable repertoire of techniques and approaches developed over decades continued to be useful to formulate new ideas about abstraction and finding new formal problems. Operating like a scientist, Soto experimented with the bases of kineticism till the end of his life.

This double panel of composite structures shows an even more abstract version of the Escrituras developed by Soto decades earlier. Instead of traces still close to characters, the wires constitute interconnected sequences that are more similar to drawings, allowing spectators to grasp, in one single view, the general tendency of each part. Instead of stopping perception in the rhythms of reading, this Doble escritura contrasts the precision and clarity of the trace with the alternating density of the reticular lines (stronger white lines above, stronger black lines below), resulting in a composition whose vibrations reaffirm materiality. Works such as this point towards Soto’s continual experimentation, an artist willing even to play with the modalities of his own concepts, like that of dematerialization: in the end, the immaterial and the material are two sides of the same coin.

As pointed out by Estrellita Brodsky, it was between 1950 and 1969 when Soto developed the repertoire of techniques and approaches that would define said formal research throughout his career as an artist. With the human being as the work’s motor, a view of art as the site of immediate encounter between spectator and reality is affirmed. Where the traditional conception of art saw in a painting a window towards a transcendental dimension, Soto’s modernism made of a painting a particular extension of reality itself. Thus, the exclusiveness of oil techniques began to give way to a wide inclusiveness that, in time, came to formulate a new constructivism that did not discriminate between materials, formats, and techniques.

Through the concepts of dematerialization and instability, Soto spent decades reformulating artistic knowledge about the perceptual relationships between subject and object. Among his approaches was assemblage, with which he affirmed the extensibility of the work towards reality. As unique sites where perception turned into an object of analysis for spectators, Soto’s works allowe the elaboration of a profound connection between abstraction, movement, and everyday life. The visual unity of objects is destabilized in painting, delving into questions about the phenomenon of perception from aesthetics, in a type of experimentation that Soto saw as comparable to that of physics.

The Sphère Lutetia was designed as a large-scale sculpture, in which the hanging metal rods are set upon a regular gird, so as to form a sphere. Painted white and red, the contrast and porosity of the figure provoke a sensation of immaterial lightness, as if it was a cloud; spectator movement creates and recreates – in every step – the entire work, changing constantly in perception. The effects of the environment (a little wind, for instance) would also lead to movement by the work itself, therefore affecting how its materiality comes to be perceived. 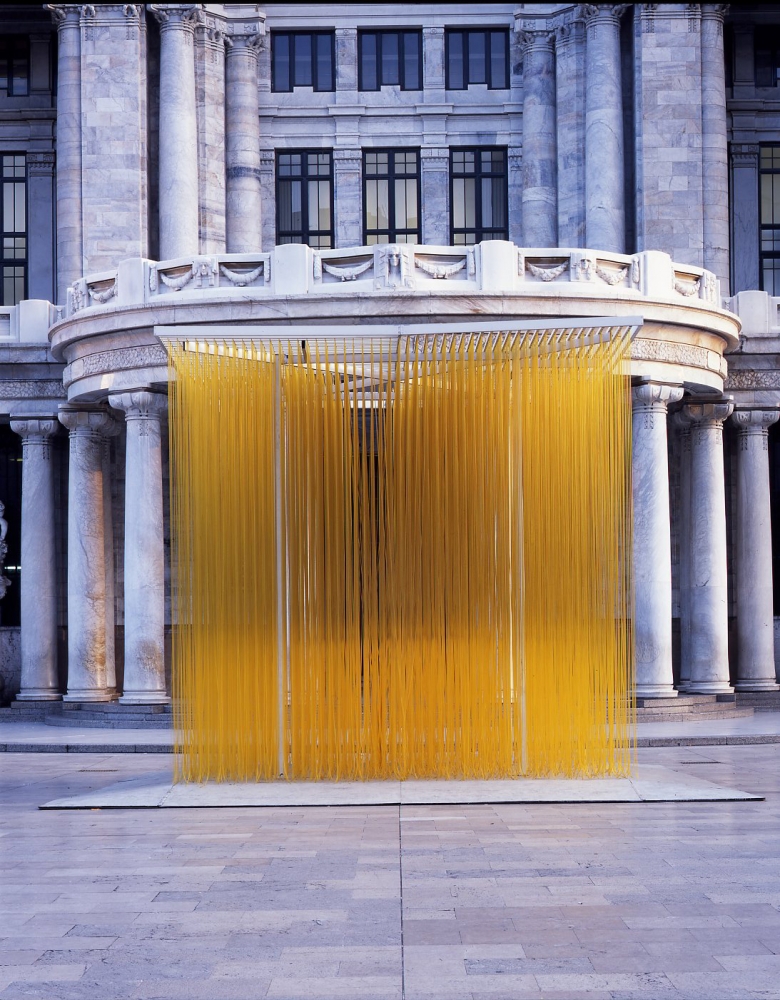 The formation of structures is importantly reflected in the series of large-scale installations known as the Penetrables. These works become coextensive with the places where they are installed, allowing the movement of people to become the departure point for the experimentation – more than the contemplation – of the work, as well as the re-evaluation of that which is perceived as more important as that which is thought. The multiplicity of points of view and experiences, as the artist held, should not just be summed in order to determine the work’s unity, but should be integrated as a continual synthesis of reality, made and remade with every movement.

The issue of synthesis is explicitly referred to in the series he developed around writing since the 1960s. Similarly, since the 1980s in another series known as the Ambivalencias Soto studied the relationships between color and plane, following the inquiries of early 20th-century modernists such as Wassily Kandinsky, except in a contrary direction, seeking not the spiritual but the material and concrete.

The “characters” of this Escritura are practically deconstructed – in their abstracted form they seem like elegant calligraphic traces. Their clarity – drawing-wise – is complemented by the patterns upon which they are superposed, in the sense that their own linearity reaffirms the reticule. While in other works of this same kind it is the reticule which plays the main role in the dematerialization of that which is placed in front, in this Síntesis the writing is revealed as essentially lines that can also assume a dematerializing character.

This is how "Escrituras" (writings), as materialization of language and therefore of meaning, becomes the center of experiments that seek to abstract its origin as points and lines over planes, as sites of perceptual inflection, where the rhythms and interactions between every “character”, every trace, come to the fore. Writing is dematerialized not only before the reticule that produces new perceptual relations, but also in itself as an experience of something universal, independent of any language or meaning in particular: “the immaterial”, Soto said, “is the tangible reality of the universe. Art is the sensible knowledge of the immaterial.”

With the Serie Síntesis, Soto experimented with bringing together all the methods and techniques he had learned in previous decades in order to create new approaches to the issue of perception. The squares in this plexiglass structure, perfectly defined as color blocks, are activated by specators when, through movement, the interaction with the background grid starts to unravel their solidity. Turned into vibrations by the eye, the colors mix and seem to have no fixed place in space: Soto achieves with it the dematerialization of pure colors

In the plexiglass structure a series of black and blue lines alternate over a background grid with enough length between them so as to generate, depending on spectator positions, the apparent disappearance and consolidation of lines into groups. The movement of people changes, in their perception, the width of the series, often appearing as groups of three, sometimes coinciding into ordered, symmetrical patterns, and sometimes, rather, as asymmetrical ones.

His Ambivalencias do the same for color, in parallel fashion to the large-scale constructions that the artist made throughout his career. Where the interplay of colors indicated emotions and psychological processes in Kandinsky’s studies, in Soto’s series they fulfill a strictly perceptual function, centered upon decomposition of the form into shifting vibrations that depend on the position and movement of spectators. These two series represent significant moments in Soto’s history, inasmuch as they belong to periods of intense experimentation: the search of the immaterial through movement left us with one of the most interesting bodies of modern and contemporary work of the 20th century.

This plexiglass structure exemplifies the ways in which Soto experimented with the idea of plane superposition: two blocks of the material, upon which reticules and a singular line that serves as center or visual guide can be appreciated, create a diversity of optical effects that play with perception beyond bidimensionality. The transparent mass recalls the immersion in the very space in which spectators are, situating their movement as the central element gives the work of art its finishing touch, in a sense.

This piece is part of a long series of experiments by Soto through the use of mobile elements and variations on materials and structures. In this case, upon the glass is to be found the silkscreened grid, accompanied by strong, lateral black lines. From the support above hangs a metal rod that, thanks to the nylon cable’s length, slightly surpasses the vertical length of the work. A part of the rod is painted blue, meaning that any sort of movement provoked by the environment creates a vibration thanks to the relationship between the rod and the grid; the straightness of the rod seems to break and even zig-zag, very slightly, where the color is.

"Art and science are engaged in a common struggle to confront universal questions.”

Mini Portrait of Jesus Soto from Colección Cisneros on Vimeo.