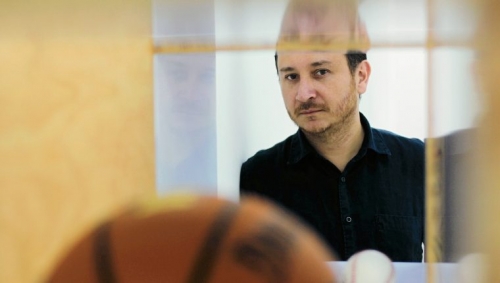 He studied Visual Arts at the National School of Fine Arts of Guatemala. His work has been characterized by the recontextualization, manipulation, accumulation, and appropriation of objects of mass consumption. Through the clash of resulting meanings, Escobar emphasizes a temporal encounter between the contemporaneity of things – sports items, McDonald’s cups, carriages, male undergarments– and the history of the Latin American spaces from whence they originate. With a certain degree of irony and ludic intention, his work provokes confrontation and criticism before consumer articles that, resignified as archaeological remnants of the present, evidence the complexities of the region’s visual culture.

The formal approach in Escobar’s work takes as its point of departure the dynamic and spatial potential of objects, their sculptural qualities and the characteristics of the materials, developing spatial and geometric relationships through the objects themselves. For instance, the Kukulkán I (2007) and Quetzalcóatl (2004) installations develop like abstract figures rooted upon a materiality that calls attention upon shadows, the interplay of light, and the way in which they occupy each place.

Darío Escobar lives and works between Mexico City and Guatemala.

Pigment on wood and metal